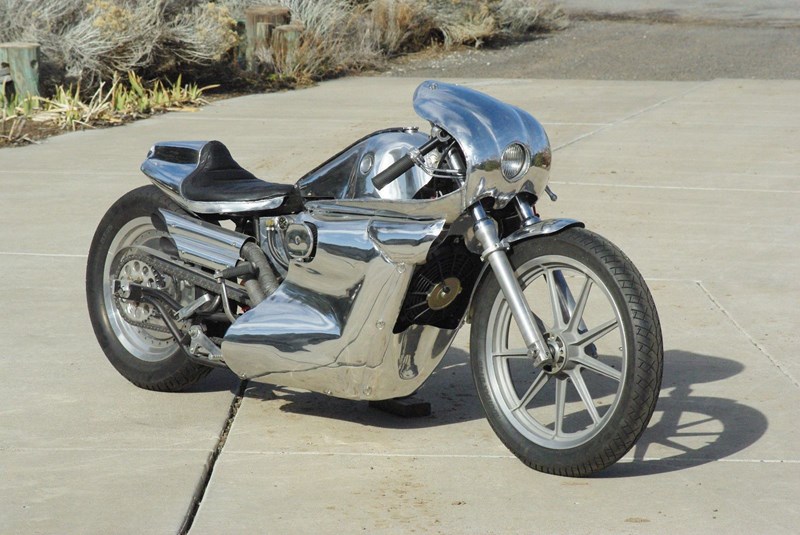 1972 HARLEY DAVIDSON BONNEVILLE SALT FLAT RACER One of a kind!

Thousands of hours of labor. Piece of Art you can ride and display. This is a full custom 1972 Ironhead Sportster built to race at the Bonneville Salt Flats in 2014. As those who follow Speed Week know, it was rained out in both 2014 and 2015, so this bike was never raced. Unfortunately in 2016 it could not race due to lack of sponsors. Featured in Dice, Wild Motorcycles, Biker Zone magazines, & various websites. Bodywork was hand formed all of the bodywork from 5052, .050" thick aluminum. The tank is actually a shell that flips at at the rear to improve access to the top end components- underneath is the actual fuel cell mounted on the backbone. It's about a gallon capacity with a Pingel petcock. The tank shell has one-off sand cast "Silver Fox" aluminum badges. The project started as a 1972 Sportster engine in a 1972 frame, with an Arlen Ness Hardhead neck grafted on. The work was done very cleanly. 4"stretched backbone with a 40 degree rake. It has a Mikuni HS40 flatslide carb with an accelerator pump and having the Morris Magneto rebuilt by Morris with a rare earth rotor. Both of these mods made the bike very easy to start. It is kick start only, no electric starter. There are custom machined rocker shaft nuts left and right, and a frame mounted oil cooler in the opening behind the wheel. The rear half of the frame is solid, made from 1" eighth wall steel tube. It bolts into the shock mount holes, the original swingarm pivot hole and the lower lugs off the downtubes. Harley 16" Fatboy disc rear wheel with custom stepped aluminum spacers, with 19" 7 spoke cast front wheel and custom stepped brake disc block off plates, with Bridgestone Battlax tires. Rear Sportster disc with Honda master cylinder. Controls are custom made of aluminum, with CNC "Busch" pegs. 39mm Narrow Glide front end, no front brake, legs have been shaved and grooved. Aluminum clip-on controls, Biltwell polished Whiskey throttle. Has an adjustable Ducati performance steering damper. One-off custom leather pleated seat and tank pad. Cycle Electric "batteryless" model voltage regulator, designed to power lights or small accessories with no battery or capacitor. It is wired to a 4" 12 volt halogen headlight and LED rear tail / stop light with on off switch. 9" electric pusher fan with toggle switch to keep air moving over the heads and evacuate hot air from under the fairing. Custom made dual exhaust from bend pieces, with aluminum heat shield. The bike meets all SCTA racing specs for APS-PG1000 class. Safety wired axles and nuts, heat sleeve on fuel line, dead man kill switch along with kill switch at hand, thick chain guard, Battlax tires are not rated for the record in the class, but had approval to run at the speeds I thought the bike would go- under 150mph. All the other requirements for Special Construction, Partially Streamlined class were followed.