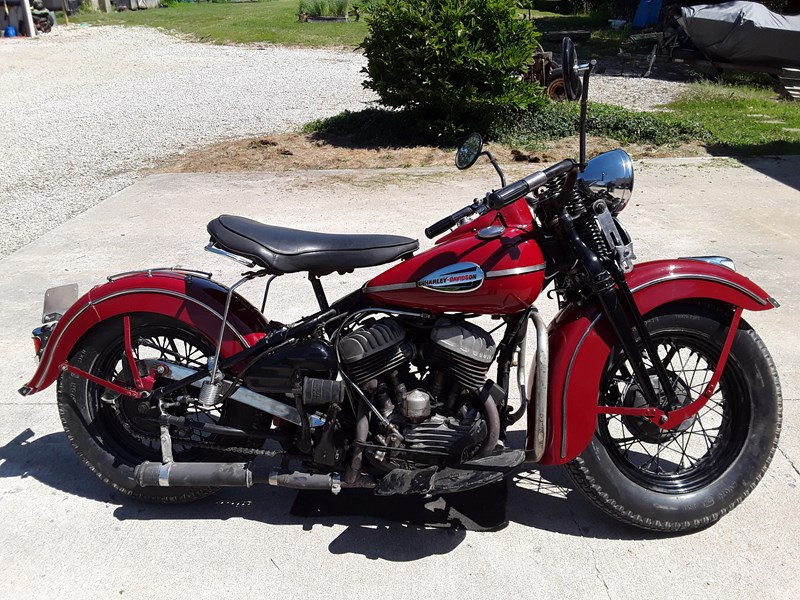 This is a 1942 WLA Harley-Davidson motorcycle that has been modified to look like the civilian model. It has the 45 cubic inch flathead (side-valve) engine. My dad bought the bike in 1964 and rode it a few years. It then sat in a garage until he had it overhauled and painted in 1997. I have copies of all the records for this work. I took ownership of the bike when my Dad passed in 1998, so my family has owned the bike for 56 years.

The bike is in very good condition. It starts 2nd or 3rd crank and runs well. I ride it 50-100 miles a year and it always commands a lot of attention. As with all old Harleys, it leaks oil from the crankcase chain cover, so I keep a pan underneath the engine when storing in my garage. If it has not been run for a while, oil will get on the exhaust pipe and will smoke briefly when the engine is started. The speedometer has never worked since we have had it (looks like the speedo drive gear is worn out) and the horn quit working several years ago.

The motorcycle has a clean title for easy transfer. I had to get a new title issued due to some discrepancy in the original paperwork. The VIN# 42 WLA-26954 is recorded on the original 1964 Bill of Sale and Title. In 2004, I noticed that the stamp on the cylinder boss was 42 T21338 and did not match the title. Since the VIN# is on the engine in these old Harleys, apparently someone switched the top part of the engine prior to my dad buying it and did not update the title. I have verified that the belly numbers on the left and right crankcases are matched (both have ID#s of 43-21696). In order to have a clean title, I had the motorcycle inspected by state authorities in Missouri and a court declaration of my ownership. The motorcycle now has an ID plate fastened to the frame with the new VIN# DRMVB0000161415MO (see picture). I have retained all of the paperwork, including a copy of the original title that my Dad was issued.

I do not claim that this motorcycle is restored to any original condition. Some parts I know are not original. For example, the studs in the rear wheel are socket head cap screws with locking collars that I have used for a long time. Rather than a Harley lug wrench, I use a rachet with extended socket (see picture) that I store in the tool box. Although not technically restored, it’s a really cool ride.